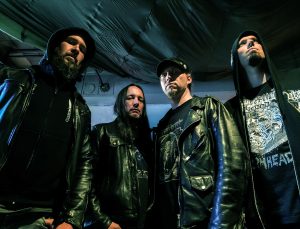 OPHIS has been a force in the global Doom Metal scene since fucking 2001. Having released 2 EPs, 4 full-lengths, 1 compilation and having toured Europe 5 times in 21 countries has established their name in a career slowly but steadily (it is Death-Doom Metal, after all). The band always remained part of the Underground, never giving in to any demands of the market or musical fashions. And even though OPHIS never reached commercial fame-levels as the international leaders of the scene (as they never intended to), they became somewhat iconic within the international underground, with many younger bands quoting OPHIS as one of their main influences.

Their second album “Withered Shades” became a small classic of Death-Doom Metal, marking the change from a merely unknown amateur act towards a staple within the scene, going that path ever since.

Just like any band which sticks around for such a long period, OPHIS suffered many line-up changes with singer / guitarist Phil being the only remaining founding member. But one thing never changed: the intensity of the music. OPHIS definitely emphasized the brutal aspects of Death-Doom Metal from day one, and this never changed for one second. While most other long-term running Doom bands rely on clean vocals, keyboards or even electronic influences, Ophis remained raw, primordial and aggressive throughout the years.
They also never relied on gimmicks – fancy costumes, weird multimedia light-shows, images of a certain kind – OPHIS do not even use a fucking backdrop for fuck’s sake. They never try to act something out which is not really them! This may forever prevent them from getting hyped – but this is what the true fans love them for.